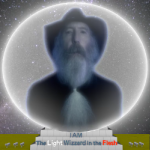 Born in Corona California on Saturday 14 January 1961 at 6:32 at 3666 1/2 Valley View in Norco, I grew up Autistic thinking I was normal till 2000 when my Father called for my Birthday and told me I as an Autistic Ashkenazi with an extraordinarily high IQ, as such I have had a hard time communicating with people and as a result of not liking to get into arguments, I did not talk much if at all about my understanding of the Universe with anyone, for one thing, I have never actually met anyone with as high of an IQ as myself, so I tend to view everyone as Stupid, and not interesting enough to even talk to, so I have very few friends, and even they do not know me, because I keep Secrets, being in the Military this worked out great, but now that I am Medically Retired for Gulf War Syndrome, it has made it hard to do. I wrote my PhD in Physics on "The Principles of the Trinary Universe", where I prove how real Science works and how stupid Sheeple are for eating from a type of Tree called Yew, which only Stupid Sheep would eat TaxUS, and that is why I call Yew Stupid.